With airport security and travel being about as much fun as a root canal, airport terminals today are striving to become unique destinations people want to visit.  With a reputation for creating visionary environments, Daroff Design, based in Philadelphia had an adventurous solid surface thermoforming project at Philadelphia Airport’s Terminal F and they knew who could help.

ASST had worked with Daroff Design previously on the Baltimore Convention Center and the design firm is well known internationally for high-end public and signature hospitality environments.

ASST (pronounced ASSIST), since its founding in 1998, has become an industry leader in commercial architectural fabrications establishing a reputation for taking on project challenges other solid surface fabricators might avoid.

With a passion for excellence and an impressive portfolio of successfully completed projects both nationally and internationally, ASST’s in-depth portfolio ranges from curved Corian® benches for the White House Visitor’s Center in Washington DC to an enormous curved solid surface Krion® staircase for a corporate building atrium in Boston. 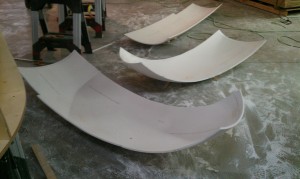 The company provides surfacing solutions coordinating a wide variety of materials in the market sectors of healthcare, education, retail and corporate/public space. The company’s headquarters in McSherrystown, Pennsylvania, encompasses 52,000 sq. ft. and includes both offices and fabrication facilities, including a very large thermoforming workshop.

Among the equipment at the disposal of the 33 employees of the company are three thermoforming ovens and two vacuum tables, as well as a 60-ton proprietary press and a vacuum press related to patented ASST technologies.

ASST fastened the Corian® to the understructure (Fig. 2)

Starting with Daroff Design’s drawings, molds were CNC machined with medium density fiberboard (MDF). After sanding, the molds were placed in the vacuum table and a heated sheet of ½” thick “glacier white” Corian® solid surface was draped over the molds and vacuumed to the desired shape. (Fig. 1)

The Corian® sections were then joined to the ribbed plywood understructure and fastened in place. (Figs. 2 & 3) 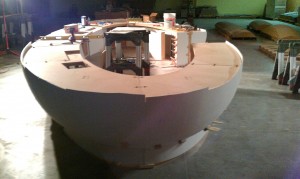 The desk was made in segments with the final glue-up and sanding to be done later on-site. (Fig.4)

The curved 3form® Chroma transaction ledge was thermoformed to the radius of the desk and featured LED lighting allowing the desk to glow like a beacon. (Fig. 5) 3form® Chroma was utilized elsewhere with CNC signage and backlit panels on the stand-up counters.

(Fig. 6, 7 & 8) The next time you fly into Philadelphia International Terminal F be sure not to miss this unique destination! 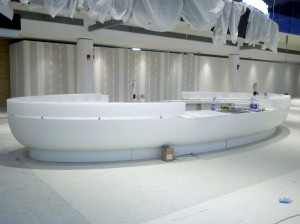 Andrew Dreves, ASID, is the Director of Marketing /Products Workshop for ASST, 350 South St., McSherrystown, PA 17344; www.asst.com. He is responsible for strategic business development, marketing, branding and product design initiatives for the company and can be reached by email at andrewdreves@asst.com or by phone at (717) 630-1251 ext. 305. 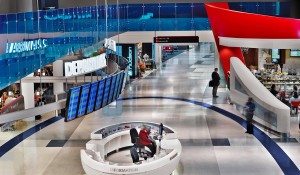 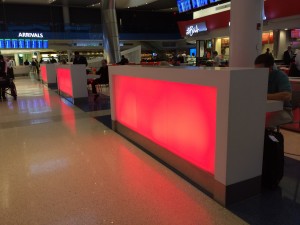