TUCSON, AZ, October 1, 2017 – Inc. magazine ranked SolidSurface.com No. 4614 on its 36th annual Inc. 5000, the most prestigious ranking of the nation’s fastest-growing private companies. The list represents a unique look at the most successful companies within the American economy’s most dynamic segment— its independent small and mid-sized businesses. Companies such as Microsoft, Dell, Domino’s Pizza, Pandora, Timberland, LinkedIn, Yelp, Zillow, and many other well-known names gained their first national exposure as honorees of the Inc. 5000.

SolidSurface.com co-founder and CEO, Kyle Carpenter, had this to say:

“It’s quite an honor to be ranked among the top 5000 of America’s fastest growing companies, and then to see how previously ranked companies moved on to the top of their industries. Our expectation is to stay on track and hit the top of our industry.”

The 2017 Inc. 5000, unveiled online at Inc.com and with the top 500 companies featured in the September issue of Inc. (available on newsstands August 16), is the most competitive crop in the list’s history. The average company on the list achieved a mind-boggling END_OF_DOCUMENT_TOKEN_TO_BE_REPLACED

With airport security and travel being about as much fun as a root canal, airport terminals today are striving to become unique destinations people want to visit.  With a reputation for creating visionary environments, Daroff Design, based in Philadelphia had an adventurous solid surface thermoforming project at Philadelphia Airport’s Terminal F and they knew who could help.

ASST had worked with Daroff Design previously on the Baltimore Convention Center and the design firm is well known internationally for high-end public and signature hospitality environments.

ASST (pronounced ASSIST), since its founding in 1998, has become an industry leader in commercial architectural fabrications establishing a reputation for taking on project challenges other solid surface fabricators might avoid.

With a passion for excellence and an impressive portfolio of successfully completed projects both nationally and internationally, ASST’s in-depth portfolio ranges from curved Corian® benches for the White House Visitor’s Center in Washington DC to an enormous curved solid surface Krion® staircase for a corporate building atrium in Boston. END_OF_DOCUMENT_TOKEN_TO_BE_REPLACED 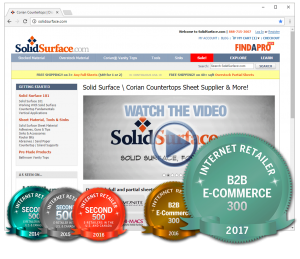 Tucson, AZ—SolidSurface.com–the online source where you can purchase virtually any brand, color or size of solid surface decorative surfacing material–has been named by Internet Retailer and B2BeCommerceWorld.com as one of the top300 B2B (Business to Business) e-commerce companies for 2017 for the second consecutive year. They have impressively been ranked 39th in the Hardware/Home Improvement Industry. Additionally significant, Internet Retailer magazine has also recognized SolidSurface.com as a Top 1000 general e-commerce website, not just B2B, for the past four years.

B2B E-Commerce companies in the Hardware/Home Improvement category are expected to grow by 28%, to more than $13 billion, up from $10 billion last year, mainly due to the continued strength of the housing END_OF_DOCUMENT_TOKEN_TO_BE_REPLACED 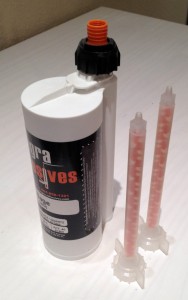 Have you ever spent hours correctly measuring, cutting and fitting pieces of Corian® or other solid surface material together, only to have your seams fail? If you have, then you know how frustrating this can be!

How do you avoid this? The key is to keep your solid surface adhesive live and performing throughout the fabrication process. Here are some highly effective strategies for storing and applying adhesive to ensure the best possible performance and seaming success:

If stored correctly the adhesive can last for a year. However, the activator portion will slowly lose reactivity over time. If in doubt, run a test by dispensing a ¼” bead on cardboard and if a slow, uneven or incomplete cure results, discard the adhesive.

In addition to properly caring for your adhesive, following these eight performance guidelines will help ensure successful seaming during your fabrication process:

Here’s to Your Seaming Success!

Using a quality dispensing gun and quality adhesives, storing them correctly and following the simple procedures outlined above will result in a flawless seam most every time. If the viability of your adhesive is ever in doubt, simply run a ¼” diameter test bead on some scrap cardboard for a couple of feet and look for slow, uneven or incomplete cure results. Once you are certain you have live and performing adhesive, you’re fabrication process should go seamlessly! 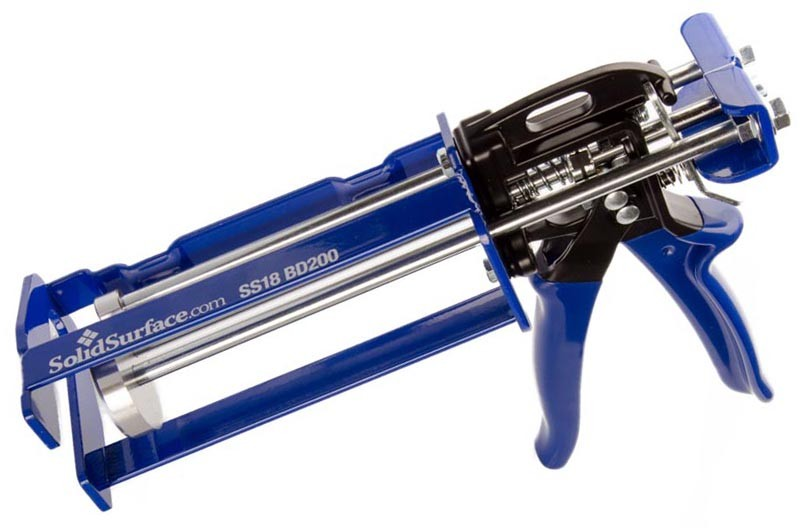 Solid surface adhesive dispensing guns have evolved to become an easy to use and essential part of fabricating solid surface. A few years ago the adhesive came in two separate containers. You then had to mix it together in a paper cup with a wooden stick, similar to a doctor’s tongue depressor.

After that you could spread the adhesive mixture onto the solid surface joint with a stick. It was a tedious, time consuming and messy process with plenty of opportunity for mixing ratio errors. If the correct amount of catalyst was added to the base component in the ratio of 10 base to one catalyst, and the temperature in the facility was right, then the adhesive would set (harden) in 20-30 minutes. In this case, the project could move along as planned.

If too much catalyst was added, then the set time would be shorter. However, the challenge in this case is that  you wouldn’t be aware of this until it started to set, making it too late to position the components. This would leave you with an excess of gelled adhesive that would have to be removed before the job could go forward.

If too little catalyst was added, the set time would be extended. In this instance you wouldn’t know it until the pieces were in place, forcing you to wait until the adhesive had set. This process could take hours, once again resulting in a project delay.

Today, almost every adhesive brand comes in a two cylinder cartridge. The larger cylinder holds 10 times more base component than the smaller cylinder that contains the catalyst. This is where the terminology 10:1 adhesive comes from. [See Photo 1] 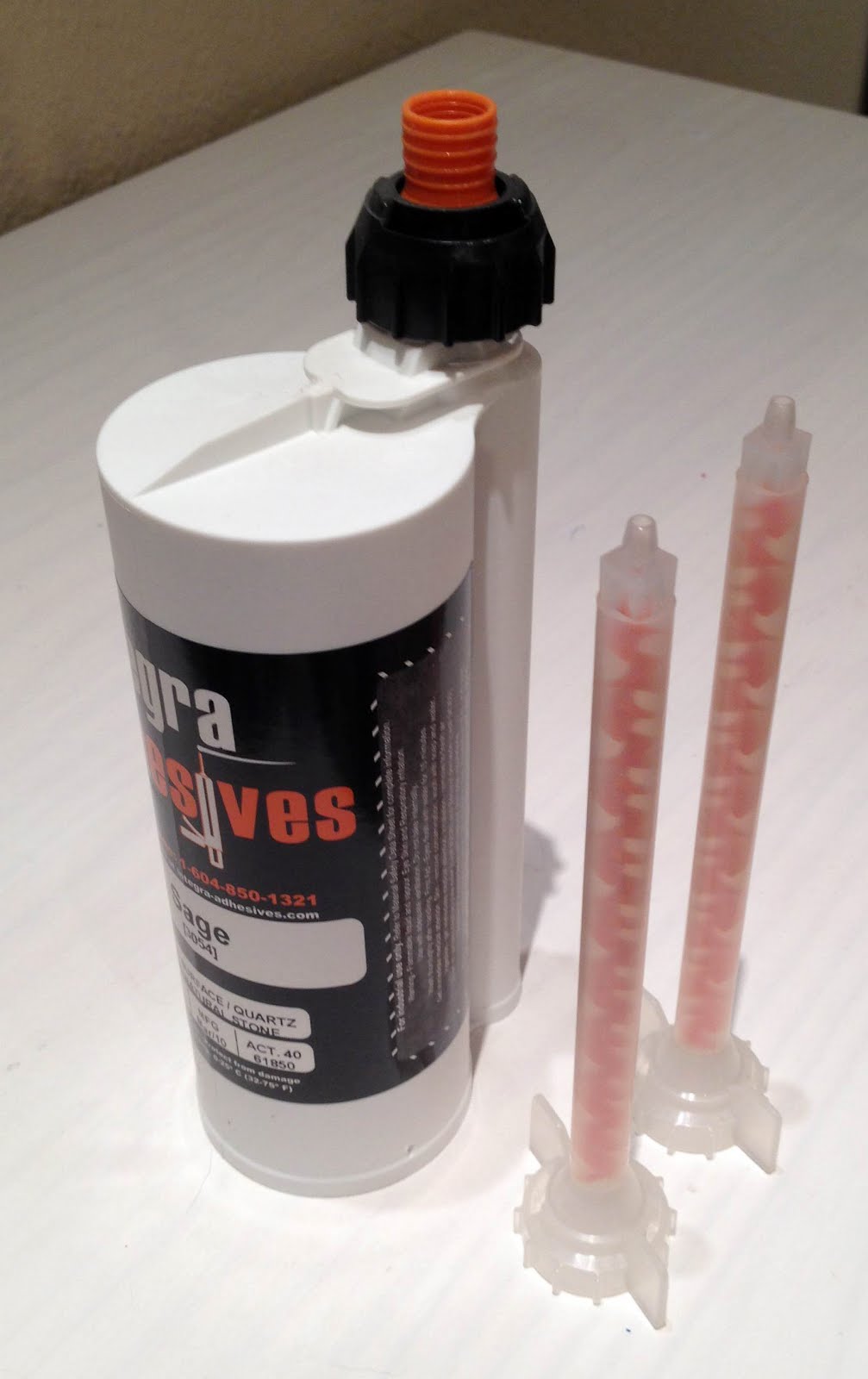 This delivery design allows for the same ratio of adhesive to be dispensed, cartridge after cartridge. When you pull the adhesive gun trigger, the adhesive in the cartridge is applied directly to the solid surfaces to be joined. This results in a lower risk of project delays due to improper component ratios.

Now, let’s consider the top evolutionary qualities of the new solid surface adhesive guns and how they can positively impact the success of your project:

How do these top 10 qualities fit into the task of seaming solid surface?

Lets take a look at the actual steps that promote a good bond and successful project:

As you can see, the new adhesive guns have been optimized to make your solid surface projects easier and more effective. Here’s wishing you every success(!) and be sure to also visit our instructional guides for working with solid surface for more in-depth instruction.